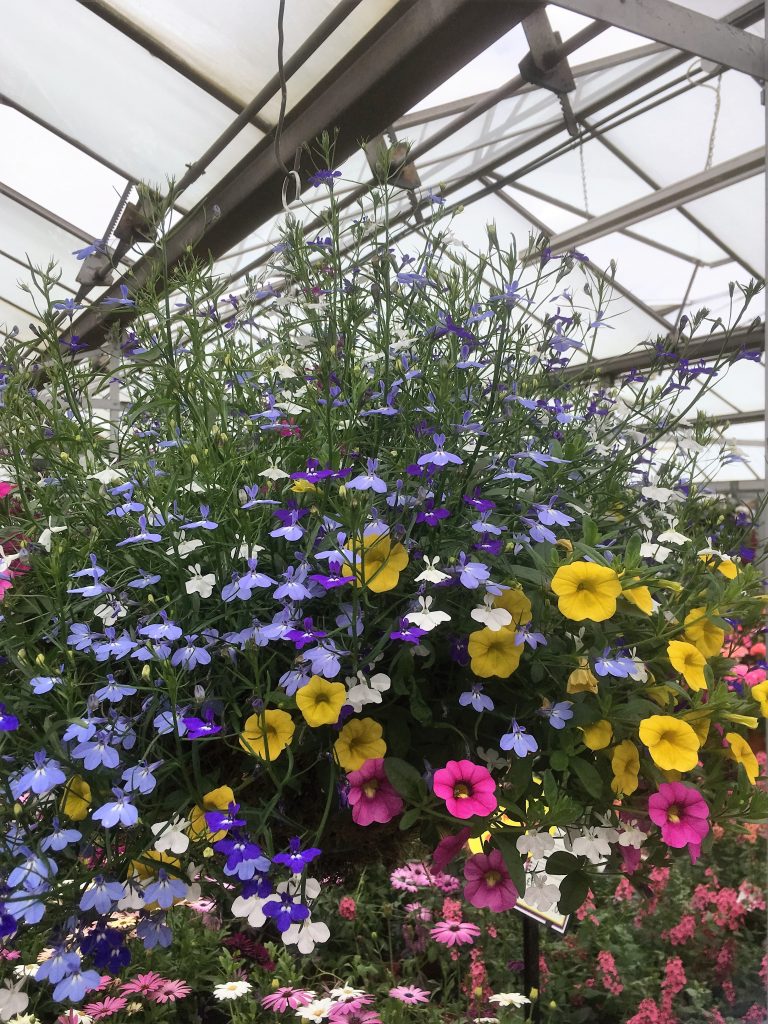 What started out as a very early season after a mild and wet winter has now turned into a later season after the snow and late frosts in April and May. Even into the third week of May we still had damaging frosts which would have spoilt hanging baskets and runner beans if they’d been outside.

As we move from June into July and August there’s still time to plant larger pots of Geraniums, Fuchsias, Cosmos and Dahlias to fill in any gaps in borders. Water to get established and feed on a weekly basis. Dead head regularly and you’ll have colour through to the first autumn frosts, which hopefully will be late starting.

Hanging Baskets need liquid feeding weekly – even with the slow release fertilizers added to composts, you’ll see the extra benefits from liquid feed. Baskets soon dry out especially when they’re sheltered from rain at the side of a house so watering morning and night in very warm weather is a must.

Tomatoes and cucumbers need water regularly during hot weather – preferably in the morning – this keeps the atmosphere humid and prevents the plants staying damp overnight which can cause problems with powdery mildew or botrytis – this is especially true for cucumbers as they can be very susceptible to mildew. Remove any badly infected leaves. Good growing conditions will help to prevent the spread – good light for plants, low humidity particularly at night and the use of resistant varieties.
Keep sowing or planting salad crops such as lettuce, spinach, spring onions and radish in the veg patch to get a continuous harvest. Use very fine netting to cover cabbages, cauliflowers, carrots and other particularly susceptible vegetables against flies, pigeons and butterflies. Harvest peas and runner beans regularly whilst they are young and tender, freeze any spares for home grown vegetables during the winter months. Keep beans and peas moist and spray over the foliage to encourage pods to set.

There’s plenty of choice in the herbaceous sections at the moment as well as the ever popular Lupins and Delphiniums there’s the less common Astrantias, Centranthus and the butterfly loving Verbena bonanariensis and the increasingly popular perennial Geraniums. Trim back Aubretia once its finished flowering and it will produce some flowers again later in summer as well as keeping the plant compact. Make the most of a warm sunny day and pull or hoe up any weeds still lurking in your borders.
Keep roses in good condition by spraying every 10 days with ‘Roseclear’ or ‘Multirose’, this will keep any aphids under control as well as dealing with powdery mildew and black spot. Woolly Aphid is a pest of fruit trees that is getting more and more common. It appears as fluffy white cotton wool like patches on fruit tree stems and ornamental trees. The insect is hidden under the fluff and sucks the sap from stems. Use Provado Ultimate Fruit and Vegetable Bug Killer as a control, but follow the directions as there is a minimum harvest interval. After the wet winter there’s lots of slugs around at the moment – be sure to look out for slug damage on vulnerable plants such as Marigolds, Hostas and the tender new shoots of herbaceous plants.

There’s still time to treat moss on lawns with M O Bacter if the weather is not too dry and we have regular supplies coming in.

For new potatoes in October, or at Christmas, plant seed potatoes in tubs in July and August. Growth will finish in October, but leave the tubers in their pots until required for cooking. Remember they’ll need frost protection once the winter frosts appear in November and December.

It seems only 5 minutes since the spring bulbs were in flower, but they’ll be appearing in Garden Centre’s from the end of August! If you want Hyacinths in flower for Christmas, they must be planted and put into a dark cool place in September. Most varieties require an 8-10 week cool period followed by 2-3 weeks of warmer conditions to bring them into flower. Use a compost specifically for bulbs as it will contain charcoal to keep the soil sweet.